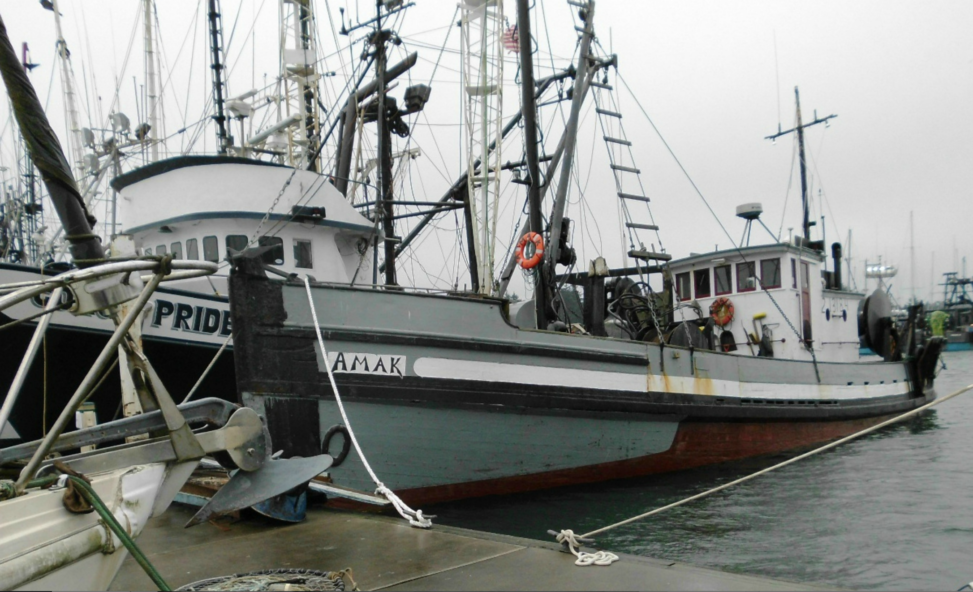 Three portraits of people captured by photographer Alan Mitchell as the crew of the Charlie Ells FV Amak passed through Port Orford in the 1970s. Captured near the Port of Port Orford during one of Alan’s frequent photographic journeys during that time period.

The images are much better quality scans to improve the ones that already exist in our archive. You can see the earlier ones using the new search feature of our website. We’ll be replacing all of the low resolution images with these higher quality scans and adding many new ones!

And here is a reminiscence by Bridget Hildreth, an artist and grandaughter of Charles Ells, on the event of his passing:

The pastor, a friend of ‘Chaz’s’, regaled story after story about the wild, fearless, and good humored captain. He shared the stories my uncles had provided. Of course, there was that incredible story about an attempt to cross the uptight Columbia River Bar off Astoria in the 40’s, a story that has been on display in the Astoria Maritime Museum. He and his crew had laid out two days with a full hull waiting, until a pilot boat finally signaled Granddad to bring the Amak into port. It was too soon. A breaker hit the Amak, breached boat, knocked wheelhouse–with Granddad and two crew inside–clean off the boat. Miraculously, the wheel house stayed afloat because it was attached to the oil tank that buoyed the sailors up. The pastor, animated, described Chaz atop his wrecked wheelhouse in the churning ocean bellowing and challenging the storm and their predicament: “The Hell there’s no God!!”

That was granddad’s gift. He had the tenacity to believe, even after a multitude of perilous ocean adventures. Even after his wife and daughter died in less than a year’s span of each other, to the same disease.

“My Great Grandpa Charlie was the strongest man I’ve ever known.”