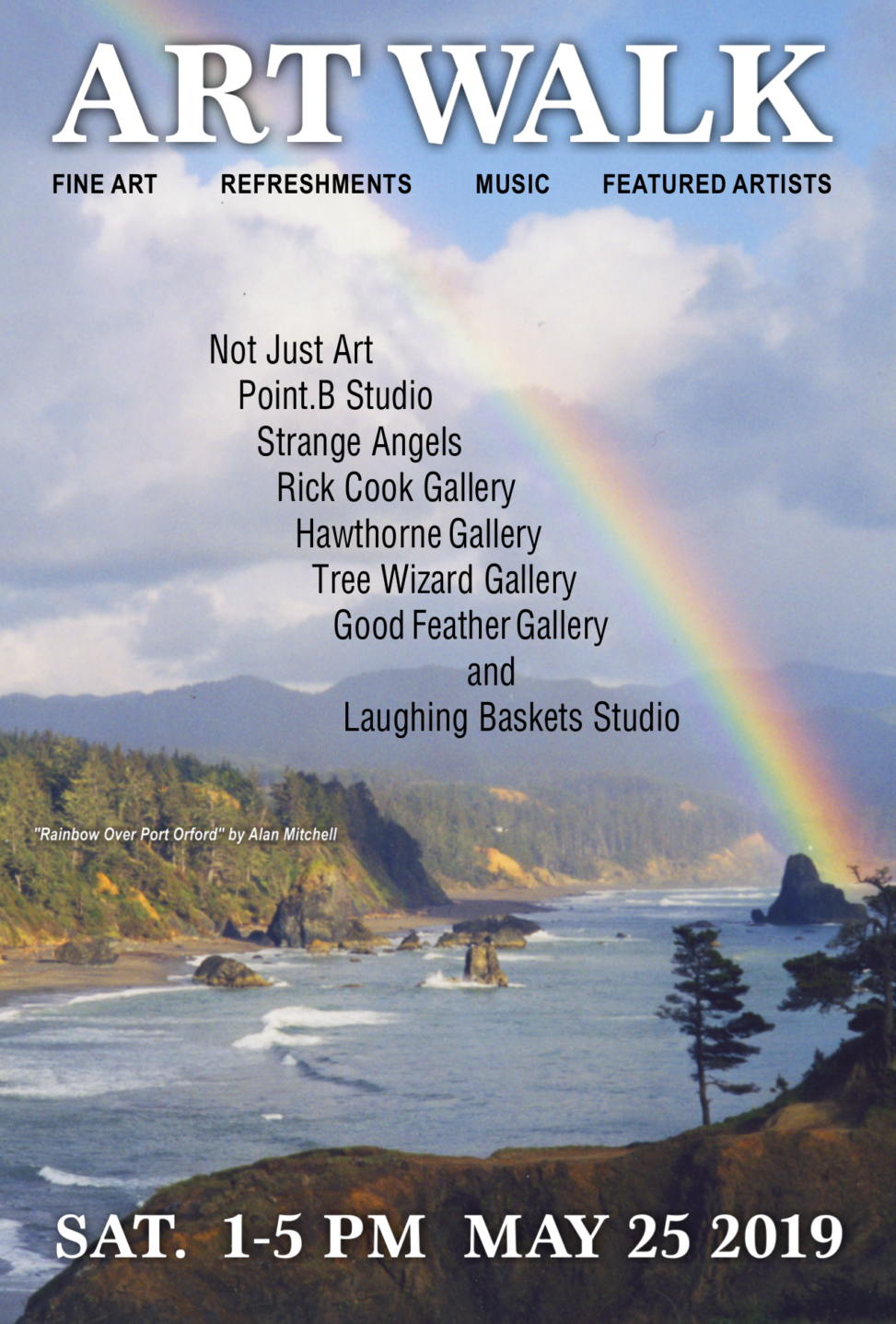 The Port Orford Art Walk has been a tradition among the galleries in Port Orford for nearly 20 years. Every ART WALK, the gallery owners in Port Orford invite a guest artist to appear on their poster. This ART WALK artist is photographer and archivist Alan Mitchell who was a long-time resident in Port Orford and still remains active in the town through his curation efforts, collecting and capturing photos of the area. His website for Home by The Sea Bed and Breakfast was one of the first that documented the happenings of the art community in its day (he and his wife Brenda were charter members of the Humbug Mountain Committee which is now known as the Port Orford Arts Council). The article below provides an interesting background on Alan’s and Brenda’s achievements which is intertwined with much of our town’s recent history. Thank you for all you have done and do for Port Orford, Alan and Brenda!

How I found Port Orford
By BRENDA FANNING FOSTER
For the Port Orford News
March 30, 2005

When the telephone rang in her Eugene home, thirty-six years ago, Brenda Mitchell, didn’t realize her life was going to change in an extraordinary way. It was the Superintendent of the Port Orford School District. After reviewing her application, the Superintendent had called to make an appointment for her interview—to be held in Eugene! She was offered the job and accepted, never having seen Port Orford. In retrospect, she believes the Superintendent was concerned that if she had first experienced the ‘Frontier’ nature of the town, she might have turned the job down.

Alan and Brenda were married only two years at the time, now thirty eight years, and both wanted to live on the coast. Being young, eager, and adventurous, they filled their 1950’s Citroen 2CV, with as much house- hold furniture and goods as it would hold, and drove to Port Orford. Alan’s construction talents were transferable, and for Brenda to be offered a teaching position, in a coastal town where she could have a horse, was a dream come true. Alan had been one of Oregon’s first VISTA volunteers, so looked at this move as another eventful journey. Little did he know.

Finding a suitable residence quickly became part of that adventure when almost immediately they found a rent-to-own home, and became homeowners. Brenda taught in Port Orford until the Junior High School was moved to Langlois. She next taught at the Elementary Level in Port Orford, and then at Ophir Elementary. Alan went into construction and real estate, built their new home, and is now business manager for their very popular, “Home by the Sea Bed & Breakfast.”

As an equestrian and teacher, it was natural for her to become active in 4-H. When they arrived, what is now Buffington Park was an abandoned mill location, the future horse arena area having been a wetland used for decades for sawmill waste disposal. Brenda and Alan then organized the building of horseback-riding arena in Buffington Park. It was backbreaking work, but with many dedicated hands, working hundreds of hours, the Park became a pleasant and habitable environment for people and horses. Brenda also taught 4-H cooking at her home and became active in “Back Acres Garden Club“.

Brenda served on the Library Board for ten years, while Alan served as Secretary of the Port Orford Volunteer Fire Department. Those were the days of frequent fire department fundraisers like huge crab feeds and raucous Fourth of July “Beer Gardens.” Working with Mayor Leon White, Alan approached the Robert Gable Family in Kentucky to obtain the funds needed to complete the construction of the City Council Chambers. Alan also served on the City & County Planning Commissions and the City Budget committee. Brenda and Alan were charter members helping to organize the Humbug Mountain Committee, which is now known as the Port Orford Arts Council. Brenda was also a charter member of the Humbug Mountain Weaver’s & Spinner’s Guild.

Once while attending a Port Commission meeting, Alan learned the cannery could hire a lot more people if the City had a large water tank. Working with Mayor White, he also learned the Coast Guard was about to dismantle its obsolete wooden water tank on The Heads, and without a replacement tank, all The Heads homes were going to be in trouble. By combining the Port’s and the City’s needs, the City was able to obtain a 100% grant for the modern reservoir which stands today on Coast Guard Hill.

Local cable TV was years away, and as chairman of the Port Orford Land Conservation & Development Committee (LCDC), Alan contacted Oregon Public Broadcasting, and requested they include Port Orford in their own plans. This request eventually resulted in Curry County obtaining Public Broadcasting Television. Alan spearheaded the fundraising of the $2,000 needed for Port Orford’s equipment, and then the classical FM radio station, KSOR of Ashland, also located here.

When it was realized the harbor was sanding in because of a jetty project, Alan contacted the Wall Street Journal and CBS Evening News about Port Orford’s dock problems. On July 4, 1974, the story ran on the Wall Street Journal’s front page (“Tiny Port, Army Engineers Exchange Salty Charges in Breakwater Brouhaha”), and shortly after, CBS sent a film crew to film the story. The end result had the Army Corp of Engineers holding its first town meeting in Port Orford to present its solution to our problem.

Now retired after teaching 20 years at Ophir Elementary, Brenda is enjoying perfecting her quilting, woodcarving, basket weaving, beading, feather lei work, painting, and traveling. Alan is busy managing the bed & breakfast (now one of Oregon’s oldest), and playing host to the newcomers of Port Orford. Brenda and Alan may have moved to Port Orford, but they have also moved Port Orford.