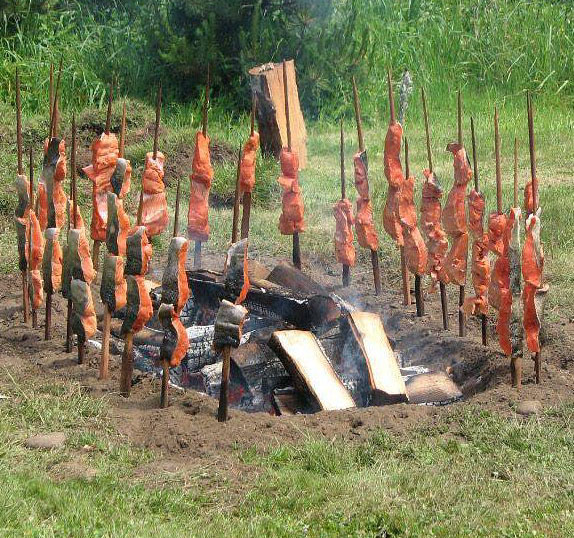 Tseriadun Native Salmon Bake and Honor Ceremony is an annual, living history event that honors the indigenous people of our area. The US Army fort at Port Orford had a pivotal role in the Rogue River War and the removal of the First People of Southwest Oregon. This is a time for everyone to come together to pay tribute to those who lived here, the spirits of the old ones, and all who traveled the trail of tears to Siletz. It is a time to share stories, music, food and memories, so our history won’t be forgotten.

Rick Cook has played an important role in getting this event established at Tseriadun State Recreation Site, which was formerly a Quatomah Village. This site has been inhabited for several thousand years. The Honor Ceremony -Salmon Bake originally started in 1993, at the Port Orford Heads, as Rick explains in the video. It was moved to Tseriadun ( Athabaskan, refering to the rocky headlands “the place that sticks out”) in 2005. Many more details are in the video:

Tseriadun and the Rogue River Wars

Tseriadun was an inhabited Quatomah village when Captain Tichenor arrived in early summer 1851. It was inhabited for at least 7000 years until 1856, when its population was removed to the Coast Reservation at Siletz.
The Rogue River Wars started October 1855 and ended when Chief John Tecumtum surrendered to Capt. Edward Ord at Rinehart Creek July 2, 1856. In several groups, captive Southwest Oregon Indians were brought to Fort Orford over the last few weeks of the war. They were garrisoned at Tseriadun, hence the name Garrison Lagoon/Lake, adjoining the encampment.
At two in the morning of June 20, 1856, the steamship Columbia dropped anchor in the harbor. Later that day, approximately 670 people were loaded in to the Columbia, a ship meant to only hold 100 passengers, and sailed north.
On July 8, after more native prisoners had been brought to Fort Orford, a second voyage of the Steamer Columbia took away about 700 more individuals. Tecumtum and 125 of his band were not included.
“Old John” Tecumtum, as the Whites called him, was the last warrior chief to surrender after his standoff at Big Bend on the Rogue River. While in captivity at Tseriadun, Capt. Ord took pity on John’s band. It is said Ord brought down a steer and slaughtered it to feed the starving people. As punishment for his resistance, under Major John Reynolds command, Tecumtum and his band were force marched north to the Coast Reservation. This became known as the “Siletz Death March”. Because of the terrain, the grueling march took nearly a month. Many died in route.
According to Oregon Historian, Stephen Dow Beckham, the Native population of Southwest Oregon was conservatively estimated at 9,500 in 1851. Only 1943 survivors were counted at the Coast Reservation in 1857.
Prior to the coming of Euro-Americans, Tseriadun was a place of life and peace. Each day, fires were built, food was prepared, children were raised, stories were told and songs were sung. Without forgetting the sorrow brought to the village, we should also remember and honor life before. The spirits of the old ones are still at Tseriadun. When there, if we try, we can feel their presence and share their memories.

This year, we honored two of our friends and relatives, Speedy and Donny Fry, who recently crossed over. Speedy was one of the founders of the Tseriadun Honor Ceremony/Salmon Bake. He helped Grant Pilgrim cook the first years, then took over cooking in 1998. Speedy’s jokes and laughter will forever be missed.
Speedy’s cousin Donny, for over 25 years, organized the Fry Family POW WOW at Agness, Oregon. Donny attended the Tseriadun Salmon Bake, contributing salmon, pop-up awnings and stories of life on the Rogue River.

Earl Huitt shares a story with the group before everyone enjoys the salmon that has been prepared in a Yurok way of cooking, on Redwood stakes, taught by Yurok Elder Grant Pilgrim. Earl is Modoc.

And Uncle Speedy shares one last story before the meal is served.

More Photos of the event at Tseriadun 2019

Photos and More From Earlier Years

The following is a 2008 Newspaper article about our Tseriadun Ceremony.

Last Sunday at Tseriadun Day Use Park, people started arriving at about 8am. The crowd continued to grow until about 10, when we heard the boom, boom, boom coming our way from where the crowd was gathering. From our camp host’s motor home, we could see men digging a hole in the lawn.

Normally, this would be the harbinger of a big problem for a camp host. However, this was a gathering of several of our Indian tribes having an “Honor Ceremony and Salmon Bake”. The organizer had cleared the gathering and digging of a fire pit with the Oregon Parks and Recreation Department. There were people of Indian heritage from Confederated Tribe of Siletz Indians, which includes the Tututin and Takelma Tribes. Also attending were people from the Coos, Coquille and Karuk.

We sauntered into the crowd and found ourselves in a “Friendship Circle”, where everyone joined hands and rotated in a clockwise direction to the cadence demanded by the drum beats. Next, the circle broke into two lines and the lines proceeded to pass one-another with each person shaking hands with the person across from him. Nice way to interact with everyone.

Following that, an Elder, Gilbert Towner, 79 years of age, from Idaho, called everyone to an “Elder-Speak” gathering, Mr. Towner, known as “Enselsun”, and 84-year old Aggie Pilgrim spoke to the respectful group about loving one another and respecting our rivers and streams, among other uplifting subjects.

Aggie Pilgrim told of her world travels with 12 other grandmothers from various countries. This group of 13 grandmothers has spoken worldwide, even to the Pope, about respecting our rivers and streams and not turning them into garbage dumps.

Next, the Wild Salmon, which was cooked on sticks by the fire in the hole the men had dug, was served together with fry bread. We had eaten lunch shortly before the salmon was served, so we took our fish home for dinner. It was delicious. This was a great day for myself and my wife, Sandra, to enjoy these gentle people and to experience their history and customs.

Tseriadun (Port Orford Heads) was a unique Native village on the Oregon coast. Located near a coastal headland, offshore islands and reefs, and a coastal lake that was once an estuary, the village had access to a tremendous variety of resources from the sea and the land. The name Tseriadun comes from the large rocky headland that offered protected waters for ocean canoeing during much of the year.
From their homes by the coast, it was only a short hike to mountain hunting camps, and fishing sites along Kusuma (the Elk River), one of the most productive salmon streams on the Oregon coast today.The people of Tseriadun were wealthy in many ways. They lived in finely made houses built of cedar planks, with smooth clay floors. Like others in southwest Oregon, they made fine stone tools, and they were known for their sea hunting skills. They were expert canoeists, fishers and hunters, and skilled artisans. They used hundreds of native plants for food, medicine, and a variety of other technologies.The Tseriadun people spoke an Athapaskan dialect, reflecting strong ties to the Tututni and Totowa to the south and the Coquille to the north and east. They often traveled to distant villages for celebrations, trade, gaming and athletic events, and to visit relatives. Storytelling was more than a pastime; it was a way to pass on history and cultural tradition. Women usually married into Tseriadun from other communities at the Rogue or Coquille rivers and beyond, and it was not uncommon for several different dialects to be spoken in one village.Archaeological evidence shows that the native people lived at Tseriadun for over 5,000 years, and possibly more than 10,000 years. Most of the food remains at archaeological sites in Port Orford are of marine origin, including the bones of whales, sea lions, seals, sea otter, rockfish, salmon, and shellfish, especially mussels.In 1856 the Tseriadun people were forcibly removed from their homelands by the U.S. military, and relocated at the Coast Reservation (later called Siletz Reservation). Many of their descendants live at Siletz today. Other descendants trace their ancestry to those who moved back to the southern Oregon coast after the government closed portions of the Coast Reservation in the 1870s.

“Honoring Those Who Came Before Us”