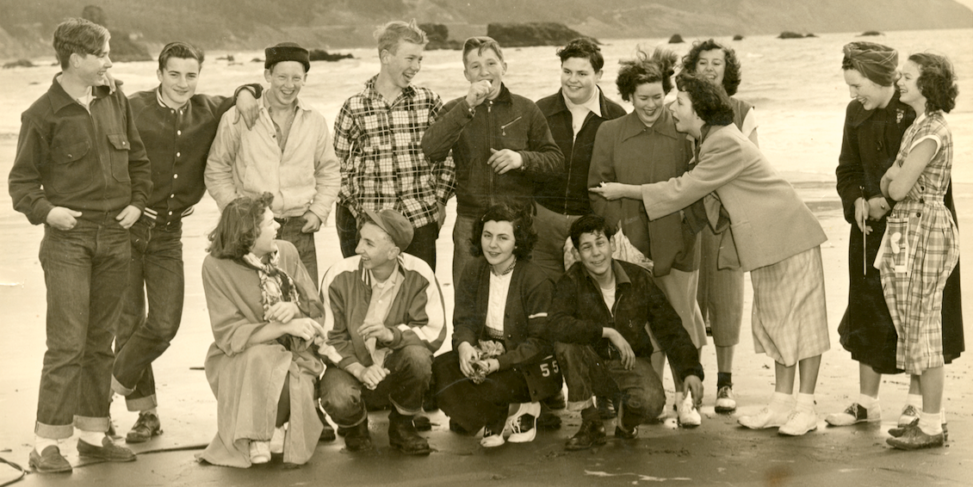 (As told to Alan Mitchell by Leon White )

It was a large wooden two story building located about a 15-minute walk north of where I lived. When originally built it was called the Port Orford School and had been used as a Grades 1-12 school. There was no formal dress code but girls wore skirts and dresses year ‘round. By the time I arrived, a separate high school had been built and the original building repurposed into a 1-8 Grade School. Students were expected to be inside by 9:00am. To encourage late arrivals to pick up the pace, the school bell was rung a few minutes before the hour. The bell was hung high in a belfry over the stairwell and (depending upon the wind) could be heard for miles. The wooden tower with its water tank was gone.

On the first level were three large rooms. One was used to store the huge amount of firewood needed to feed the wood stoves in each of the classrooms. There were three large rooms upstairs. The one above the firewood room had a piano and was used for music classes and singalong sessions using well-worn, outdated songbooks. During the second World War we sang a lot of military songs.

One of the other ground level rooms was used for the combined 1st and 2nd graders, the third room held the combined 3rd and fourth graders. The school’s bathrooms were on the ground floor, handy to the playground.

Each classroom had several large blackboards. We used chalk to write on them. Poster size examples of the alphabet and math symbols were pinned to wall above the blackboards. Our desks had wooden lift tops with inkwells we never used. Before our time, students had practiced their penmanship by using dip pens to write on paper. During my time, we used #2 Ticonderoga lead pencils instead. Behind the students, high on the wall there was a wind-up clock for the teacher’s benefit. The High School’s large assembly rooms had large portraits of President’s George Washington and Abraham Lincoln and a wall clock.

The other two large rooms upstairs were used as classrooms. One was a combined Grades 5 and 6, and the other a combined Grades 7 and 8. Each classroom had one teacher. While a teacher was teaching to one class, the other class would be concentrating on their workbooks. All of the grade school teachers were women, and with one exception, not young. Their ages ranged from 35 to 65 years of age. From a child’s perspective they all seemed to be in their 70’s! The exception I mentioned above was when we had a female fifth grade teacher who was only in her twenties. It was her second year of teaching. We had her the following year as our sixth grade teacher. When she left at the end of that year to get married, our class took up a collection to give her a ‘Going Away’ present. It was a $10 dollar roll of silver dollars we had each contributed 50 cents to.

In 1943, Mrs. Grant was my 1st and 2nd grade teacher. She was also the school principal. She had been around awhile. 18 years earlier in 1925, she had been my half-brother’s (Carlos White) 1st and 2nd grade teacher. During the years I attended Grade School, teachers were allowed to have long, thin wooden pointer sticks. These were used for teaching and disciplining students by striking the back of a hand. The strokes were always firm and usually gentle but I remember one instance when a teacher accidentally broke her pointer stick over a student’s head.

There was no Cafeteria. We had the option of bringing a sack lunch or lunchbox from home and could eat at our desk or return home for lunch. Depending on weather conditions and his work schedule, my father would occasionally drive my sister and me home for Lunch.

A favorite time of the school day for me was after our Lunch break. Before starting the afternoon’s class, our teacher would read to us from a book of stories about children and their little adventures. I’ve long forgotten the name of the book, but I know every story ended with at least one of its characters having to deal with an uncertain outcome – a ‘Cliff Hanger’!

All of the school’s floors were bare wood that had been oiled with something black. By the end of each year, they would need to be retreated. We students referred to them as ‘greased’ floors and knew they could easily catch on fire. One very hot afternoon, I recall being in class and watching wood smoke drifting up from below into our room through an open door. It was study time and our teacher was preoccupied, helping a student with his work. Without asking permission, each student retrieved their coat from the other side of the room just in case we had to suddenly evacuate. Everyone stayed calm. We returned to our desks, and waited patiently. At the end of class, we used the fire exit door and slid down the banister to the ground level. Once safely outside we were relieved to discover nothing was on fire. The smoke had been coming from a burn barrel located nearby.

The playground on the south side had a metal slide with a landing pit filled with soft wood chips from one of the local saw mills. There was also a hard surfaced double & triple jump rope area, and a large sand box filled with beach sand. All three were fun.

The playground on the north side of school had room for hardball, softball and kickball. Off to the side was a bus barn with a small school bus inside. During rainy weather, the bus was parked outside so that students could use the building as a playshed.

During fair weather days, one of the games we would like to play involved throwing a rubber ball up and over the school building. Every now and then the ball would accidentally drop into one of the school’s chimneys!

One of the popular games we could play on dry dirt was Marbles. There were many versions of Marbles. One involved marbles placed inside a circle. The marbles in the center of the circle were called ‘Mibs’ or ‘Kimmies’. You snapped your thumb and fingers to ‘shoot’ your ‘Shooter’ marble at someone else’s ‘Shooter’ marble, trying to knock it out of the circle. When a player succeeded, the shooter won all the other player’s marbles and the player was out of the game.

Another version was called ‘Pots”. It was like miniature golf where you would move your marble around a course by shooting it from hole to hole.

Fortunately our Marbles games were always ‘Friendlies’. When a game ended, marbles were returned to their original owners.

Once in awhile some of the older boys might get out of hand and the teachers would have to do whatever they could to stop the behavior. One day (after all else had failed) I remember a teacher smacked a student with a small board to get his attention.

Another memorable incident was when an unruly 8th grade student was being chased by a teacher. The student tried to escape by running into a bathroom and jumping through a window to the outside. The student wasn’t hurt and did not get very far before other teachers caught up with him.

Monday, November 3rd, 1947, turned out to have been what is now referred to as a ‘teaching moment’ for students. The flag on our school’s prominent flagpole had been hung at half mast. Our teachers gathered us together for a special outdoor assembly at the base of the flagpole. We were told that during bad weather in Eastern Oregon, there had been a deadly airplane crash. Everyone on board had died instantly, Oregon’s Governor, Secretary of State, President of the Senate, and the pilot of the airplane.

Our teachers went on to explain the significance of what had happened. When Oregon’s Governor died, the state’s rules of succession meant his job would automatically transfer to the Secretary of State. But, the Secretary of State was dead. The state’s rules then said the next person in line to become Governor would have been the President of the Senate. But, he also was dead. In effect, the airplane crash had ‘decapitated’ the State of Oregon’s government. Nothing like that had happened before.

I know there have been a lot more changes since then. The Port Orford and Langlois school districts combined to build Pacific High School midway between the two towns, the only school in Port Orford is an elementary school, and Langlois has no active schools.