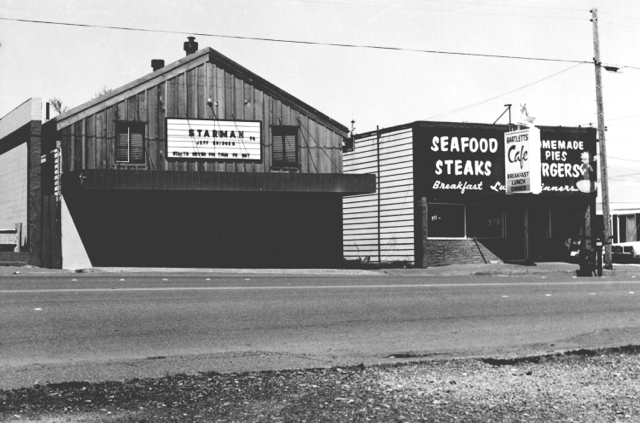 In late December 1935, ground was prepared for construction of Port Orford’s movie theater. Leroy Baker, a Salem projectionist, opened his new theater called The Colonial, April 28, 1936. Leroy was raised in Myrtle Point. He and his father, Al Baker, had shown movies in the old Port Orford WOW Hall in 1935. Lumber for the theater was milled by Port Orford’s Trans-Pacific Lumber Co. Seating was shipped from Michigan through a firm in Portland, Oregon.

The community, including Mayor Gilbert Gable, used The Colonial for lectures and live performances. Leroy Baker owned the theater till 1948, with ownership passing to Merle Alger. Alger also bought the Chinook Theater in Gold Beach.

During the later 1950’s thru early 1980’s, Lola Windmaiser managed the theater. Lola and her husband, Adolph, arrived in Port Orford after the Second World War. Movie goers remember “Ol Lady” Windmaiser as a strict disciplinarian, children and adults alike. Before the film, a message appeared on the screen, “No Smoking, No Booze, No Snuff”. Lola would patrol the isle keeping an eye out for couples hugging or kissing. She carried a yard stick at times, threatening violators of her rules. People claim Lola actually struck them with her long ruler.

In the 80’s and 90’s The Colonial became The Star Theater and was owned and operated by Nick and Linda Reynolds. Nick was a founding member of the Kingston Trio. Linda Reynolds directed the remodeling of the Lobby. The candy and concession counters were rebuilt by local woodworker Rick Cook. Linda added a built-in fish aquarium, plush carpets and brass stanchions with velvet rope to the décor. In the late 1980’s Nick Reynolds sold the Star Theater to his friend Pete Lenihan. Pete, a long time Port Orford resident, was connected to the Jazz music world. He booked Jazz and Swing performers for outstanding concerts and dances including his own Pete Lenihan Jazz Ensemble.

In later years, the theater became the Savoy owned and operated by Chris Speed, an avid movie buff and theater enthusiast. She named the theater Savoy after a favorite dog of hers, whom she had named after the Savoy Brown band. In April 2013, a fire in the concession stand destroyed the Lobby and damaged the projection room. Thanks to the fire, the old Colonial/Savoy closed for good.

The old theater building was completely restored and transformed in 2018 into a beautiful state-of-the-art fitness theater by the current owners at Mtn Sea Fitness.

SoulPie performs at the First Annual Port Orford Street Fair in front of the future home of Mtn Sea Fitness. The wall behind the band is where the old Savoy Mural used to be.