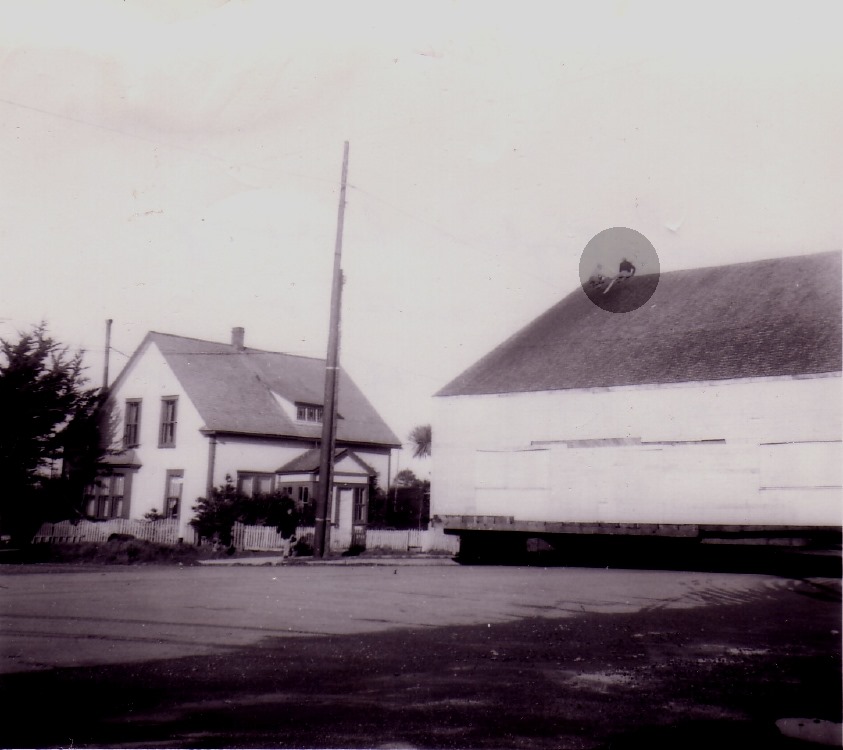 Seaside Plaza was first known as the Woodsmen of the World (WOW) Hall. The building was originally located at 7th and Jefferson, moved to its present location on Oregon Street in the 1950’s.

Originally built in the early 1920’s as a WOW Hall, the building served the community in many capacities. The Port Orford Woodsmen, Camp 609, was active from the late 1890’s till it disbanded in 1929. In the early 1930’s the Hall sold to John M. Limpach and was known as the Limpach Hall. Limpach rented the hall for dances and banquets. “The Battle Rock Women’s Circle of Woodcraft” continued to hold meetings and gatherings in the old hall during this time.
In December, 1934, Madge “Magnolia” White, daughter of Willis T. White Sr. bought the building from Limpach. Madge remodeled and opened her new hall, “Magnolia Gardens”, with a grand dance, May 18, 1935. Madge held dances and brought in bands from all over the state till 1939, when she married and moved to Salem.
Based on photographic evidence, The building under went significant remodel prior to Agnes Miller Luetwyler buying the building in the 1940’s. Aggie opened her new dance hall named “Rainbow Gardens” that also doubled as skate rink. A plan for her new restaurant, The Rainbow Cafe, was on the horizon. The WOW Hall would have to be moved.
Aggie applied for a permit to move the building but the State Highway Dept. stalled on the request. Stories still persist that Aggie defied the Highway Department and moved building without the permit. Aggie was a strong willed business woman. Whether she had a permit or not, the building got moved. At the new location, Aggie and her son Lawrence Miller continued operating a skate rink/dance hall with emphasis on skating. The north and west additions to the building were added later. After the skate rink closed, it became Pacific Super Market, Buck’s Sentry Market, Ali’s Auto, and Ed’s Under Ground Pub.

As this article was being written, the new owner had been doing repairs and upgrades which have stalled. Now the building stands idle. Who knows what the future holds for the old WOW Hall.