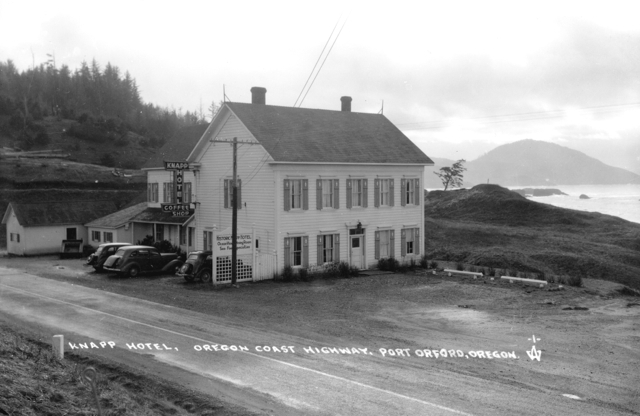 In 1859, Louis Knapp and his widowed mother, Rachel, came to Port Orford, Oregon, from Baltimore, Maryland. Their well-known Knapp Hotel was originally constructed as a boarding house in 1869. This is actually the second hotel/rooming house owned by the Knapps at that location as the first burnt down in a devastating fire in 1868. In 1883, Louis Knapp Sr. built a new updated hotel, managed by Mother Knapp.

At the southern limits of Port Orford [stood] the KNAPP HOTEL, a plain white weathered building. Louis Knapp, who died in 1929, extended his hospitality here, and in previous structures, for generations.
Rooms in the hotel are designated by names of illustrious persons. There is a Sherman Room, an Ellen Tichenor Room, a Joe Meek Room, a Jack London Room, and a W.H. Seward Room. The story is told that Seward, by then a former Secretary of State, was a guest of Mr. Knapp on his way to visit Alaska, whose purchase he helped negotiate.

The advantageous location of the hotel and its white exterior gave it the distinction of aiding sailing ships with their navigation.  At night, the Knapps would place a kerosene lantern in the window facing the sea

The family-run Knapp Hotel yielded to progress in the 1940s, when it literally stood in the way of U. S. Highway 101. (As It Was: Tales From The State of Jefferson — Shirley Nelson).